On Tuesday 25th July 2017 Minister Michael Creed T.D., Minister for Agriculture, Food and the Marine, visited Loch Aedín Social Farm in Gortlettragh Co. Leitrim to launch Ireland’s Social Farming Network project. Leitrim Development Company received funding from the Cedra fund as a result of a tendering process for the development of a social Farming Network across Ireland. The Network is being developed on a regional basis in collaboration with a number of other local development companies. In the South West a regional hub is being developed with West Limerick Resources, In the West with South West Mayo Development Company and in the South East with Waterford Leader Partnership.
Minister Creed said: “The concept of social farming – giving people, who are availing of a range of health service supports, the opportunity to participate in farming or horticulture activities in their local area – fosters inclusion.  It helps participants to build self-esteem, confidence and improve their health and well-being. For participating farm families and local communities, social farming has proved a very worthwhile and satisfying activity which contributes to community development. For these reasons, I want to ensure that this concept is developed and encouraged through the Social Farming Network.”
The Minister continued: “The ambition is to grow a network for social farming for Ireland, with its national support office based in Drumshanbo co-ordinating four regional hubs, which will assist with the promotion and delivery of social farming in Ireland in support of both participants and farmers.”
At the launch attended by over 150 people – farmers, health and social care professionals, community development advocates, and many other interested parties – heard about social farming from a range of speakers. The speakers reflected the breadth and depth of interest in Social Farming across Ireland. Colm O’Rourke was a guest on the day rekindling his relationships in his native neighbouring parish of Aughavas and speaking about how growing up on the farm with his 11 siblings was akin to having their own social farm. Both Colm and Dr Jim Kinsella from UCD spoke about being ambitious to have a Social Farm in every parish just like the GAA club model.  Jim, who is a Professor of Agricultural Extension and Rural Development at the School of Agriculture & Food Science in UCD has been involved in the development of Social Farming in Ireland for some 17 years. He emphasised the importance capturing evidence of the value of Social Farming and learn from practice, and to ensure its development continues in a sustained meaningful way.
Paul Henry who is Development Officer for Social Farming introduced Anne Melly from the HSE. Paul also spoke about those who had come together on Michaels farm to prepare for the day, former and current participants, neighbours friends and family all coming together and who found a role just doing what needed to be done.
Anne Melly from the HSE Disability services spoke about the importance of community inclusion, active citizenship, person centeredness and equality and how opportunities such as Social Farming are a perfect fit with New Directions Policy. Anne also stressed the need for an interdepartmental response to Social Farming and such community initiatives. Theresa Peacock from HSE Mental Health services spoke about how social farming provides an individual response to a person’s needs in an ordinary place by not so ordinary farmers.
But, on the day, it was the testimonials from a former participant and a parent who won hearts and minds of all who were there. Aileen McGee spoke about how social farming has shone a light into both hers and her son’s life. From the first time Cian set foot on a farm he became a different person, “Cian has gone from someone who was a recluse who had totally regressed to someone who has a reason to get up every morning”
John Murphy shared some pictures of himself before he became involved in Social Farming and told how Social Farming gave him a ‘life for himself’. John completed 30 days one day per week on the Social Farm of Jackie and Richard Moeran in Mount Nugent in Cavan in 2013, where he now works 3 days per week.
The echoing message from all these beneficiaries is that Social Farming has given them a purpose in life – a reason to get up every morning.
Brian Smyth, Project Manager based in Leitrim Development Company summed up what is the essence of Social Farming – “ordinary activities doing extraordinary things”
The Social Farming Network through the Social Farming Support office based in Leitrim Development Company is open to all who are interested in, and want to become involved in the development of, Social Farming in Ireland. To join the Network complete the EOI form on our website http://www.socialfarmingacrossborders.org/forms or contact one of our regional officers –
Border Midlands, Paul Henry Social Farming Development Officer,  Mob 086 1448796
Email – paul@ldco.ie
West – Margaret Leahy, Regional Development Officer,  South West Mayo Development Company CLG  Mob   087 6233862
Email – mleahy@southmayo.com
South West – Stefanie Jaeger, Regional Development Officer, West Limerick Resources CLG.  Mob   087 3663842
Email –  SJaeger@wlr.ie
South East – John Evoy, Regional Development Officer, Waterford Leader Partnership CLG.  Mob   087 2311061
Email –  john.evoy@wlp.ie 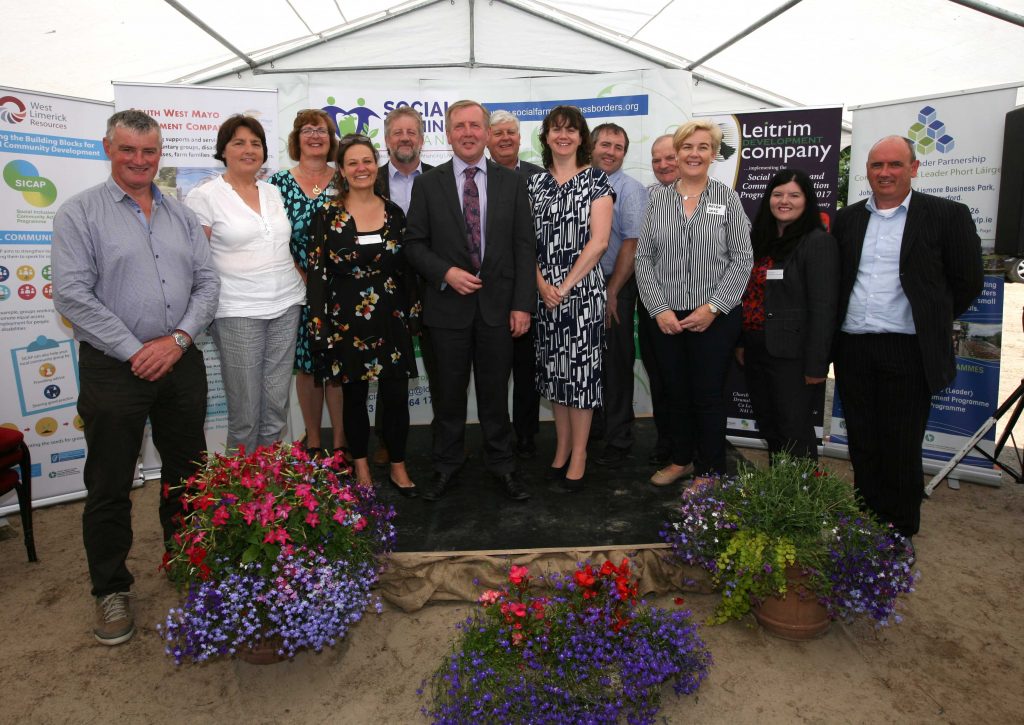 The Department of Agriculture, Food and the Marine provided initial funding of €400,000 last year for the establishment of the social farming network across Ireland and has recently extended the contract for a further 12-month period. Minister Creed said: “I am delighted to announce that support by my Department will continue for the Social Farming Network in 2017, with funding of €350,000 that will ensure progression for the project as it beds down and becomes self-sustaining.”